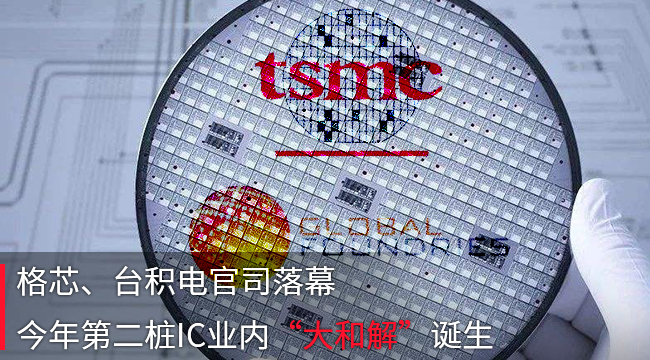 When it comes to this year's "big settlement" in the IC circle, Apple and Qualcomm put an instant end to a protracted lawsuit in the first half of the year. After the settlement, Apple 5G baseband finalised, Qualcomm important customers return, is undoubtedly a win-win situation. In a twinkling of an eye, in the second half of the year, the same "reconciliation" was performed in the wafer industry. Where should we start?.

The time, which dates back to august, has filed a number of legal proceedings in the united states and germany, alleging that the semiconductor manufacturing technology used by the tsmc has violated its 16 patents. At the same time as the proceedings were initiated, the core also applied for a court order to ban the import of products produced by the use of infringing technology to the United States and Germany.

At the time, Gexin accused TSMC of infringing technology covering a wide range of 28nm to 7nm, and downstream customers who used these process contract products were also defendants, including 20 companies such as Apple, Botong and Nvidia. In addition, the scope of prosecution even includes three component distributors.

Gexin launched an all-round crackdown on TSMC's supply chain, inevitably demanding a proportionate amount of compensation, except that the core did not disclose specific figures from beginning to end, only emphasizing that it was "huge." TSMC, on the other hand, stressed that it would do everything in its power to fight back by all possible means. Since then, TSMC has also countersued the core for patent infringement and claimed huge compensation around the world.

Just as the lawsuit became more gunpowder, the two agents chose to reach an out-of-court settlement and signed a 10-year patent cross-license agreement, ending more than two months of litigation. The so-called patent cross-license means that the parties take out the technology and patents within the prescribed scope in accordance with the corresponding conditions, and the licensing party also has the right to use it. Generally speaking, the cross-licensing of patents between the two companies helps to resolve disputes, avoid expensive litigation, and remove patent obstacles to their development, which generally plays a positive role.

When it comes to the two companies, what will be the impact of patent intersections? For GE Xin, the first lawsuit, and then the settlement, has gained a lot of benefits. By cross-licensing to obtain some TSMC patents, GE Xin can obviously raise his own value, which is to lay a better foundation for IPO in the future. Secondly, in order to settle, TSMC will inevitably pay the core a certain amount of money, which will also enrich the cash flow of the latter, which is conducive to day-to-day operation.

For TSMC, the most important thing now is to expand production capacity, attack 5nm and 3nm processes, and settle with the core at a small cost in exchange for a safe and stable operating condition. In addition, there are many downstream customers who have been sued with TSMC, which is tantamount to writing off the account together, thus maintaining its customer-oriented industrial image.

As a result, the settlement between Gexin and TSMC is beneficial to each other, so what contributed to this settlement? The reason is that the patent layout of the agency industry is complex, and neither company has an absolute chance of winning a lawsuit. At this stage, although TSMC does not coincide with the competitive field of grid core, there are still many patents involved in each other, and its source can be traced back to a long time ago.

There is one thing that can be reflected in this situation. It has been reported earlier that Zhang Zhongmou, TSMC's founder, did not include IBM's semiconductor business in the first place, leading to GE Xin's subsequent acquisition of the business and the subsequent acquisition of a large number of patents, which is tantamount to laying the groundwork for today's lawsuit.

From this point of view, Gexin has obviously come prepared to initiate a comprehensive lawsuit against TSMC this time. If the patent ownership of the two representative factories is deeply investigated, the litigation will inevitably last for a long time, and their respective normal operations may be affected by that time. Therefore, the two manufacturers now reach a patent intersection, not only for their own development to remove obstacles, but also conducive to the stability of the industry.

Looking at the background of the two major "settlements" in the IC industry this year, in the context of weak growth in consumer electronics, car sales, and the intensification of trade disputes between China, the United States and Japan and South Korea, all industry data indicate that this year is a semiconductor "sorry year." Industrial opportunities are indeed not many, and each can only hope in a few areas such as 5G and strive to maintain profit standards.

As a result, Apple and Qualcomm were repaired again in the first half of the year, in which industrial and environmental factors accounted for an important proportion, after all, the common layout of 5G between the two sides is always stronger than the cost of litigation. In the second half of the year, the driving force of this "settlement" in the wafer industry is the same, the industrial opportunities are already few, at this time, the deep litigation is not conducive to the operation of the two major representative plants, nor is it conducive to the stability of the industry.

Then turn back to the wafer industry, after the settlement of grid core and TSMC, the former will rely on FD-SOI process to serve 5G, automotive electronic customers, while the latter will still focus on advanced technology to serve high-end customers. Overall, the two companies will continue to follow their own paths like two parallel lines, profiting widely from the upcoming 5G era.