The official account administrative micro blog was recently registered. It was approved in July 15th. Micro-blog was certified as Changjiang Storage Technology Co., Ltd., and the official public number was also on the line recently.

Official account has just been issued to explain the name of the brand, which is "knowledge", "sincerity" and "tranquility".

Titanium refers to titanium, atomic number 22, which is a rare metal with light weight and high strength, which means to define the new "titanium" degree of flash technology. 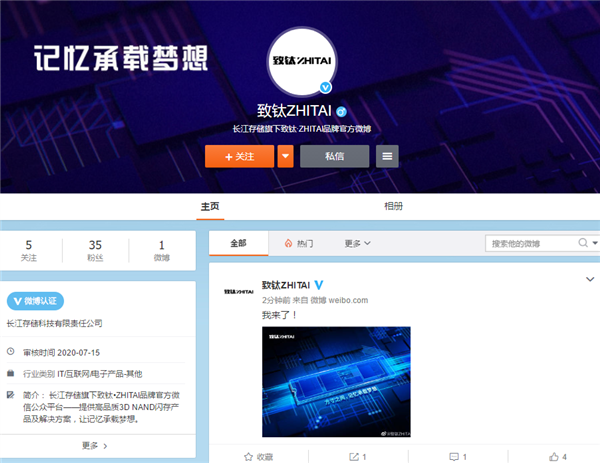 Just now they released their first microblog, announcing the first SSD product, which is an SSD hard disk with m.2 interface. From the figure, we can see that there are two flash memory, one master control and one DRAM cache on the front. The specific specifications are ominous, but the DRAM cache means that the performance will not be low.

As for whether the channel is PCIe 3.0 or PCIe 4.0, the former is more likely. After all, the first product should be stable.

According to reports, the 3D flash memory of Changjiang storage uses the xtacking architecture, which increases the storage density by five times compared with the traditional architecture, doubles the data transmission rate to 800Mbps, and the programming / erasing cycle can reach 3000 times. Over the past year, it has been successively shipped to many brand manufacturers.